It is hard to say how much an aircraft engine costs because it is included in the overall cost of a plane, but depending on type – roughly between 12 and 35 million dollars. They are extremely expensive to develop and buy, which is why they account for around 92% of total market value, despite representing only 46% of all units produced. Regardless of the hefty price tag, the latest engines have helped stimulate the development and production of advanced-design aircrafts. These bring benefits such as increased maintainability and reliability, higher passenger capabilities, greater range, and enhanced safety features.

There are almost as many different types of aircraft engines as there are types of planes. Moving and servicing this equipment requires the appropriate equipment for each engine. You have a multi-million dollar asset ready to go, but it’s across the continent from your downed aircraft, customer, MRO facility, etc.

So how do you transport aircraft engines?

Rail transportation is generally unsuitable for shipping jet engines. Uneven track surfaces and the jarring impact of rail cars when they connect make the risk of damage too high. Sea freight is an option but it takes too long (remember, an aircraft that’s not flying costs the operator a ton of money). That leaves trucks and planes.

Specially designed trucks are a safe and cost effective way to transport aircraft engines over shorter distances. They can be dispatched quickly, and their full-air suspension system protects the sensitive calibrations of the engine. Over longer distances, however, aircraft are the superior option.

However, the most important aspect of transporting an engine is how it is secured to the deck. Engines are mounted on cradles, in the same way they would be mounted on the wing of an aircraft. These cradles have shock mounts that allow the cradle to move with the normal oscillations of a truck and trailer in transit. If the cradle is improperly secured, these shock mounts could be restricted, causing damage to the sensitive calibrations of the engine bearings.

Before you set up an aircraft engine on the stand and start moving it around to different locations, you want to verify that it has been properly secured. It will then stay in place wherever you move the stand to.

An important component of any aircraft engine stand is the casters at the bottom. They are what enable you to effortlessly move these large stands around in every direction. Before you go to load the aircraft engine on top, double-check the casters.

Aircraft engine stands are well designed and can thus support large and weighty engines. It’s still important that you observe the stand’s weight limit because if you went past this limit, you could damage the stand and even the engine on top of it.

There are many wrong ways and only a few right ways to transport an aircraft engine, ensure you are using a partner with the experience and expertise necessary to protect your high-value assets.

Enginestands.com is an aircraft engine stand leasing service for Airlines, MROs, engine repair shops, leasing companies, freight forwarders and other customers around the world. We can offer high-quality equipment lease, all our engine stands are checked according to the highest standards and quality requirements. Stands are built according to OEM specifications and fully approved by the Engine OEM. We often handle the logistics for our clients worldwide. 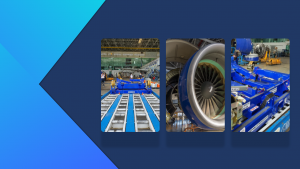 These small steps are critical to the success of your aircraft engine transportation. Enginestands.com can help a lot in the aircraft industry when engines need to be removed, worked on, and transported to different locations.

All aircraft need periodic inspections and maintenance in order to ensure they are airworthy and safe to fly. Some of...

Parts Are Just a Piece Of The AOG Solution

With over 8,000 engines in service around the world, with customer aircraft operating in every corner of the world, ensuring...